US Women’s Soccer Team Files Lawsuit Against US Soccer Federation 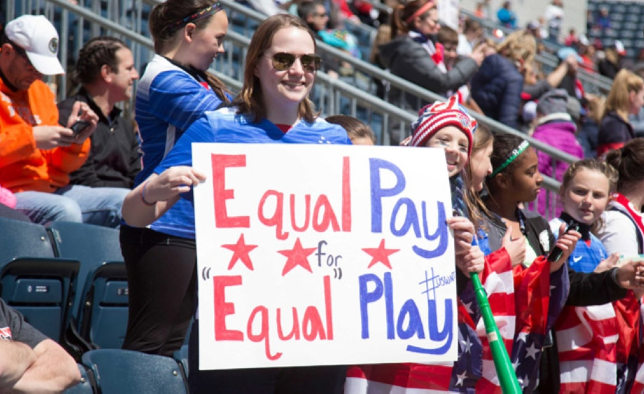 Twenty-eight players, four World Cup titles, a 13-0 win and a $100,000+ gap per game in comparison to male players. The US Women’s National Soccer Team (USWNT) is being paid less than their male counterparts and it doesn’t make sense why.

After Title IX was passed in 1972, which outlawed gender discrimination in education programs, women’s soccer teams were popping up at colleges all around the country. The US Soccer Federation (USSF) hired a coach to select a few college players to participate in the 1985 Mundialito tournament in Italy. This was the beginning of the women’s national team.

The USWNT recently won their fourth World Cup title in July of 2019. The women earned $260,869 each for winning the World Cup, in comparison to the men’s team that would earn $1.1 million. The women have won four World Cups. The men have only ever reached the semi-finals, being awarded third place.

The USWNT recognized this gap and on March 8, 2019, they filed a class-action lawsuit against the USSF under the Equal Pay Act and Title VII of the Civil Rights Act. The team believes they are performing at a similar level as (and at certain times doing better than) the men’s team and still being paid less.
In addition to not having equal pay, women aren’t given the same playing, training and travel conditions, as well as unequal promotion of games. For example, the women played 21% of their games on artificial turf, compared to 2% for the men.

The USSF agreed to mediation, or having a neutral third party help out in the dispute. The Federation puts some of the blame on FIFA, saying that they give different prizes for male and female teams, the Federation just spreads that money around to the players.
The wage gap doesn’t just exist in soccer and other sports. According to the United States Women’s Bureau, in construction and maintenance jobs, women earn 67 cents to a man’s dollar. In sales and office jobs, women earn 87 cents.

I reached out to Ryan Dell, Mehlville alumni and Head Equipment Manager for the USWNT, for any additional information on the lawsuit, but due to pending litigation, he was unable to comment.

The USWNT has been thriving with their recent World Cup win and is training for the CONCACAF Women’s Olympics Qualifying Tournament coming up in January.

When looking at the fact that the women’s team plays on artificial turf which could potentially cause injuries and still managed to win four World Cup titles, it makes it almost embarrassing for them to be paid less in comparison to a men’s team that hasn’t even made it further than third place in the World Cup.
The women are even bringing in more revenue. According to the Wall Street Journal, between 2016 and 2018, the USWNT brought in $50.8 million dollars, while the men brought in $49.9 million.

While there might be a difference between the two, because the women’s team is playing against other women and not men, they are still doing considerably better than the men. The gap in wages is degrading and the fact that it is almost 2020 and a women’s team is doing better than a men’s team and is not getting paid enough to reflect that is problematic.

The government has passed Title VII of the Civil Rights Act and the Equal Pay Act, but there is a clear gap in wages of people doing the same job at the same skill level. 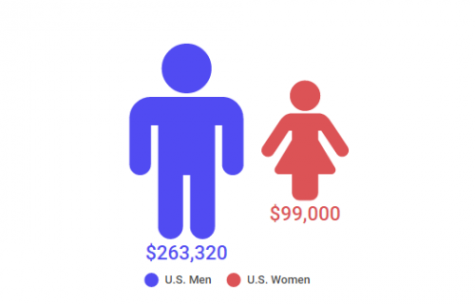 The women’s team earns as little as 38% of a star men’s player makes with a gap of $164,320. Graphic courtesy of Montclarion Sports

We haven’t done enough to get rid of the ingrained sexism in sports and other careers and the USWNT is fighting back. They are showing the US Soccer Federation and other big corporations that women have noticed the inequality and they are willing to step up to get the pay they deserve.

The trial will begin on May 5, 2020 in hopes that this team of strong female players receive what they have rightfully earned: equal pay.