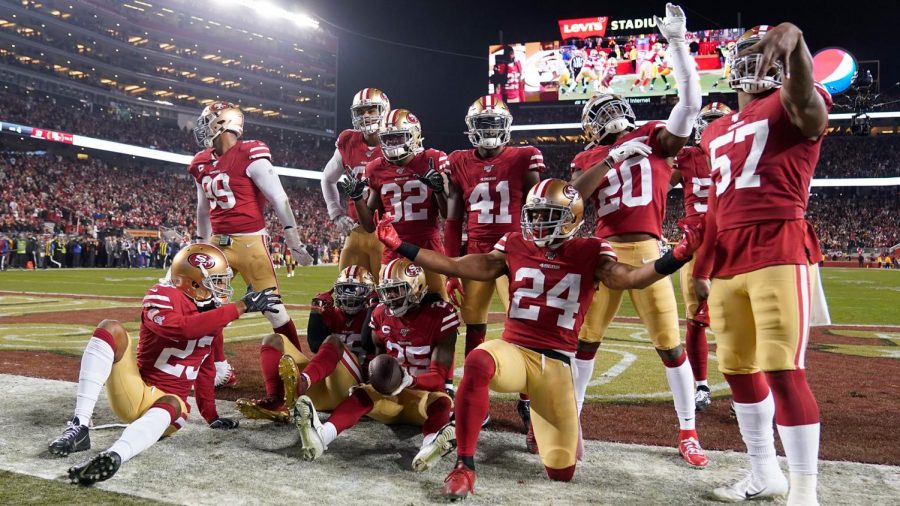 The number one seed San Francisco 49ers pose after a turnover.

The San Francisco 49ers are the best team in the NFC. They have the number one defense in the NFL and the second best rushing attack. The 49ers had an easy schedule through the first half of the season and then one of the hardest through the second half. Many called them pretenders until they beat the (at the time) 4-2 Carolina Panthers 51-13. The one question mark after that victory was, is Jimmy Garoppolo good enough to help them win games, and he proved he is. The next game, Garoppolo saved the team when the defense and running game wasn’t cutting it. If the 49ers can stay healthy, no team will be able to stop them.
The New Orleans Saints are too pesky to not get the second seed in the playoffs. The Saints don’t die. If they have an injury, the next guy in line fills in and does a great job. Drew Brees went out with a thumb injury early in the year so Teddy Bridgewater stepped in and went 5-0. Alvin Kamara, the Saints star running back, got hurt so backup Latavius Murray stepped in with back-to-back 100 yard games. Their defense is no joke either, being in the top 10 for total defense.
The Green Bay Packers will be the number three seed in the NFC. Aaron Rodgers yet again leads his team but this time he has some major help. Rodger’s defense isn’t complete garbage and another Aaron, Aaron Jones, is his running back is playing great with 14 all purpose touchdowns and 645 rushing yards through week 13. The defense has stepped up from years past with help from Za’Darius Smith and Preston Smith.
The Philadelphia Eagles will be the number four seed, even though they might have the worst record for all NFC playoff teams. Their division is pretty weak, but the Eagles or the Cowboys will be in this position come the end of the season. The Eagles have an easier schedule for the remainder of the season, which will probably squeeze them into winning their division. I don’t really have much else to say about them because I don’t think they’re good. The Eagles will probably be a first round exit.
The Seattle Seahawks can secure a wildcard spot with the number five seed. The Seahawks aren’t a fantastic football team, but a 10-2 record says otherwise. Their defense is 24th in total defense but can step up in big moments. The reason they keep winning is one man: Russell Wilson. He is having the best season of his career and is the front runner for MVP with Lamar Jackson close behind. Wilson leads the league with a 26-4 touchdown-interception ratio.
The Minnesota Vikings can get the other NFC wildcard spot. The Vikings are a good team but they are inconsistent. Their offense revolves around Dalvin Cook, who is top three in all purpose yards not including quarterbacks. Their defense is middle of the pack at 16th, yet they aren’t one of the best teams in the NFC. The Vikings quarterback is Kirk Cousins and he can be lights out or flat out garbage and he needs to step it up to make it far in the playoffs.

The New England Patriots. I’m tired of writing about this team but they never leave the top of the NFL. The defense is the second best only to the 49ers and those two teams go back and forth for the number one spot each week. The offense plays second fiddle to the defense, Brady and the rest of the offensive side of the ball don’t have to do too much as long as their defense locks up the opponent.
The Baltimore Ravens will be the second seed in the AFC. The Ravens last loss came in week four and they have been tearing up their opponents ever since then. Lamar Jackson has been playing outstanding and with a better supporting cast than Wilson, this team is built to win playoff games. The defense is ranked at number 9 in the league. They have the number one rushing offense in the league averaging over 200 rushing yards per game thanks to Mark Ingram and Jackson. The Ravens have speedy receivers in rookie Marquise “Hollywood” Brown and Willie Snead. This Ravens team knocked off the undefeated Patriots and don’t be surprised if those two teams see each other again in the AFC championship.
The Kansas City Chiefs will be the third seed in the AFC. Injuries have plagued this team’s offense this year. Former MVP Patrick Mahomes has not been playing to his level, though his level is pretty high. Their offense is still high powered with receivers like Tyreek Hill, Sammy Watkins, Mecole Hardman and the second best tight end in the league in Travis Kelce. They do not run the ball too much and their defense, well they suck. They are 26th in the league and they don’t really stop much of anything. So if the offense doesn’t get rolling against a top defense then it might be over for these Chiefs.
The Houston Texans will take home the fourth seed in the AFC. The Texans are in a similar situation to another team in these predictions. Their team isn’t great but they have a quarterback who is playing out of his mind, and his name is Deshaun Watson. Watson has been single handedly keeping his team afloat along with DeAndre Hopkins while their defense is 27th in the league.
The Buffalo Bills will be the fifth seed in the AFC. Their defense is very good but their offense is pretty trash. The Bills defense is the third ranked defense behind the 49ers and Patriots. The problem is that they do not have many weapons on offense at all. Josh Allen is not a great quarterback. He is more of a scrambler than a thrower but they have a top 5 rushing attack. If they can ride their running game and defense, they can get in as the fifth seed.
The Indianapolis Colts will be the number six seed in the AFC. They have a great offensive line with a balanced offense. Their receivers aren’t the greatest but they are capable enough to get the job done. The defense is good and they make plays when they need to. Jacoby Brissett is good enough to do well behind the best offensive line in football and their run game is number four in the league. The defense is number 13 in the league yet they are 6-6 through 13 weeks. If they can win out or at least only lose one more game, they can easily get in the playoffs as the sixth seed of a weak AFC conference.