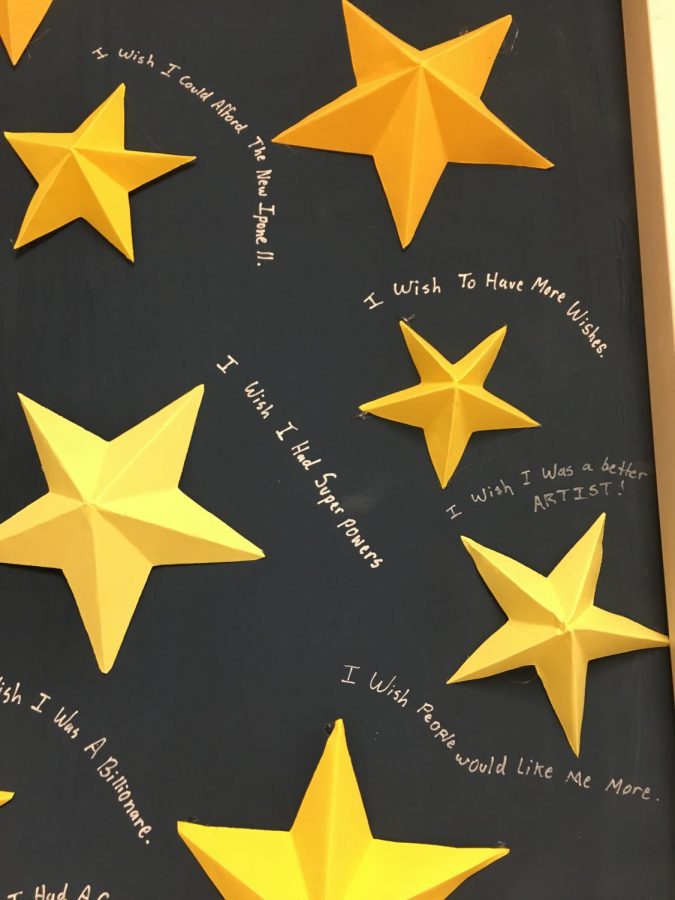 Bryon Ngo's piece, titled Wish, was featured in this project

“My idea was to bring back memories as a kid, so I made stars with wishes on top of them. As a kid, I didn’t really make a lot of wishes, and now, growing up, I make more wishes than I should have,” Byron Ngo, a senior, says about a project he made in his sculpture class.

Ngo, along with 15 other students in Laura Brugere’s first semester, 5th block sculpture class, finished the class with one big project. However, this time, it was different: students were able to attach audio clips to the art with QR codes.

The audio clips are the student’s statement about the piece, which can go into detail about the story behind it, how they got the idea, and the making of it, among other things. The QR code was then displayed with the sculpture in the auditorium.

A second QR code leads to a link where you can provide feedback or praise to the artist directly. Anyone who did send them feedback was sent an email back directly from the artist.

Though the display was taken down, this way of showcasing artwork could be implemented again in the future.

“The student’s voices give a personal touch to the artwork that wasn’t there before. Students and staff can have a more personal experience with the art,” Brugere said.

She says that, when she was a high school student, this is exactly the type of project she would have liked to do. “…if I had the option to record my voice instead of standing up in play it in front of an audience, I think I would have had a different outcome with a lot of my artist’s statements.”

For students like Marley Durham, who wants to create art for a living, it’s a great opportunity. She said that she wished more people had sent feedback to her directly; feedback was only sent to Brugere instead of her.

The ability to record their statement rather than speaking live gives a lot of these artists confidence, Brugere says. Because of the intimacy involved in some of artists’ statements, there’s a lot of fear in doing it, but by being able to prepare and edit the statement ahead of time gives them the certainty needed to do it.

These don’t have to be limited to sculptures, either. The QR codes don’t take up much space and the technology is relatively inexpensive, meaning that any and all art classes can implement this into their practice.

Having a place to express the meaning of their art gives these young artists a place to be comfortable with the world viewing it. The codes also give the student body of Mehlville a way to interact with the art in a way that wasn’t possible before.

With new technology available to everyone in the school, this is a long overdue update to student art. And, hopefully, it’ll make the school better for everyone – artists, students, and staff alike.