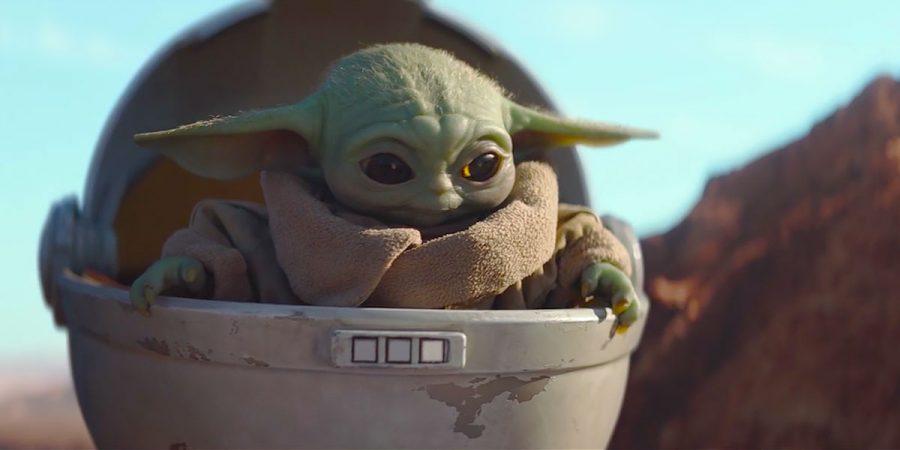 Baby Yoda has taken over the internet. Photo Courtesy of Hypable.com

The Mandalorian has become a cultural phenomenon.

The show was released with the premiere of Disney+, the streaming service Disney launched to rival Netflix. Contrary to Netflix’s strategy of dumping entire seasons all at once, The Mandalorian dropped weekly, keeping viewers talking and anticipating the next chapter. I much prefer that method because it gives me time to talk about it with others and theorize what will happen in the next episode, which is what Star Wars is all about.

This story takes place five years after Return of the Jedi, but one doesn’t need to watch any other Star Wars media to get into this show, as it has a lot for long time fans but it opens the door for casual TV fans to enjoy this space western.

One character that has taken over the internet goes by one name, Baby Yoda. He only goes by “the child” in the show but viewers have nicknamed him that because Yoda is the only other of his kind (apart from Yaddle who was briefly shown in The Phantom Menace). The memes for Baby Yoda are all over the place, even if one has never seen the show they are sure to see something to do with Baby Yoda.

Baby Yoda has captured the hearts of everyone who sees him. His massive puppy dog eyes and his cute little mannerisms make everyone love him. Another great thing is that the creators don’t use him as an “awhhhh” moment all the time and he serves a bigger purpose than just a cute thing to look at. The relationship that Baby Yoda has with the Mandalorian is really what binds this show together.

Yoda’s species is unknown and basically any backstory about him is nonexistent. So even for massive Star Wars fans, this is all a guessing game. Writer Jon Favreau and Producer Dave Filoni can take this character and species any way they want.

Original Trilogy fans (episodes 4, 5, 6) seem to enjoy it far more than anything since the OT. It brings back some of the old nostalgia and overall feel from those three beginning movies. Favreau and Filoni use lots of practical effects and focus on making the background full of weird aliens and making it feel grungy and dirty everywhere the Mandalorian goes.

The show is already in pre-production for season 2 and I can not wait to see sweet Baby Yoda again.