“The Addams Family,” a Drama Production in a time of need 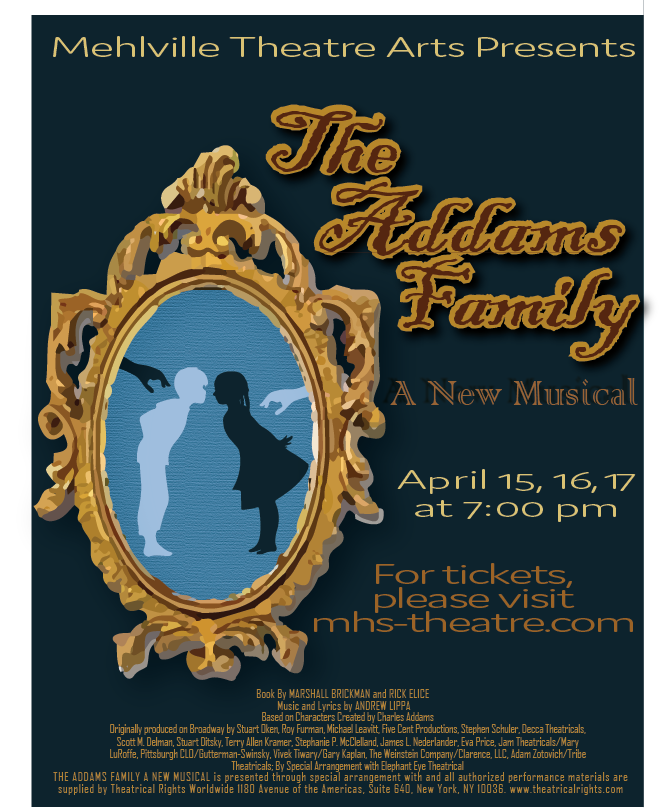 The arts have always been a mainstay in our society, with different musicals, plays, movies, concerts and TV shows. Many things have changed globally and the world seems in disarray, human gatherings and social events have been left in the dust. The arts took a big dip when the pandemic began, and now it seems there’s a chance for a big comeback. But what happens when a high school drama production, which is already chaotic in a normal year, happens in a time like ours?
The “Addams Family” is a new musical production currently underway, and its rehearsal process is unlike any other. With the dangers of the Coronavirus knocking on everyone’s door, new precautions have been taken to ensure the production carries on safely. Masks are a mandate, the rehearsal spaces are cleaned rigorously, and human contact has been extremely limited, along with the creation of a main cast and an understudy cast.
In fact, this show that rehearses in person will not be shown to audiences in typical fashion. The actors and crew members will perform the show for three nights, all of which are in-person in the auditorium, these performances will be recorded and then later streamed to the homes of the audience.
“When putting on a musical in times like ours, I have to be ready to change our schedule at any moment and be completely adaptable to whatever changes are thrown our way. I also was really concerned about how much we perform and rehearse a group, but thankfully everything so far has gone smoothly,” Director Johanna Beck said.
But it hasn’t all been bad. “Kids are actually learning to be more aware of their surroundings now thanks to our situation, and it’s certainly something I’ve come to appreciate,” Beck said.
With the question of why a show is so important to put on in today’s world, this is what she shared. “Kids need the exposure, experience, and distraction that the arts and drama productions give to those who participate, and I wanted to ensure this time kids did not need to suffer through another virtual experience. I chose “The Addams Family” because I knew I had the right cast to do it with, and I wanted to stick to a darker theme for this year,” said Beck.
Speaking of the perfect cast for the show here’s someone that has been a great addition to the drama club. Ella Burns is a sophomore who auditioned for this musical and earned the role of Wednesday Addams on the understudy cast. This is Burns’s first big drama show.
“Being in a musical for the first time has been a crazy experience and one I certainly love, I’ve definitely come to realize actors and crew members have a harder time behind the scenes than I thought. I really wanted to be a part of this show once I researched it, and I really wasn’t anxious about doing it because it’s being streamed and recorded,” Burns said.
Burns certainly has taken a liking to the drama world here at Mehlville, and she’ll certainly be a mainstay in more shows.
This drama production has been different than most, but as always it has been a joy to participate in. The show itself is full of humor, care, love, and most of all, family. It’s those qualities that the world needs more than ever now in our times of stress and separation, and its stories like these that make the arts so important. The arts give people chances to tell stories they couldn’t tell elsewhere, and in the example of this show, a story of love between two unlikely culprits.
“The Addams Family” will be streaming from April 15 – April 17 starting at 7 p.m., so be sure to sit down and watch it! A stream pass can be purchased here at https://mhstheatre.booktix.com/, and it is $15. I hope that you and anyone else you’re with take the time to sit down and watch a story that will certainly leave you smiling.