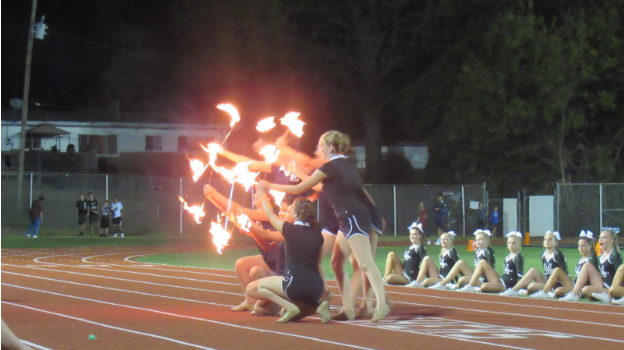 Two quarters down. Two quarters left. The football team gathers together as everyone rushes to the concessions stand. Two minutes later the familiar sound of the recording that announces the halftime entertainment comes on

Fri, Sept. 15, during the win against Seckman, the halftime routine was new.

Usually during Mehlville football games, the Pantherettes, Majorettes, cheerleaders, and colorguard each have their own separate performance to show off their skills. However, this year it was a little different. For the first time, all of the performers gathered together as one group and combined their routine.

This is new for the cheerleaders because usually they only have their cheers to perform with. “I’m excited because we’re using music for halftime…usually we just use our own words,” said Haley Stallman, senior cheerleader.

Color guard member Cait Boyle, junior, also expressed her excitement about the performance, but for a different reason. “We start practicing for homecoming starting this past summer in June.” Boyle was ready to give the performance they all had been practicing.

For the seniors, it was their last halftime performance under the Friday night lights. “It was exciting to be able to close that chapter in my life and be satisfied with it and that I did the best I could do,” said Grace Robertson, senior Pantherette.

All the halftime performers delivered a fiery routine, which only complimented the 48-20 win against Seckman.