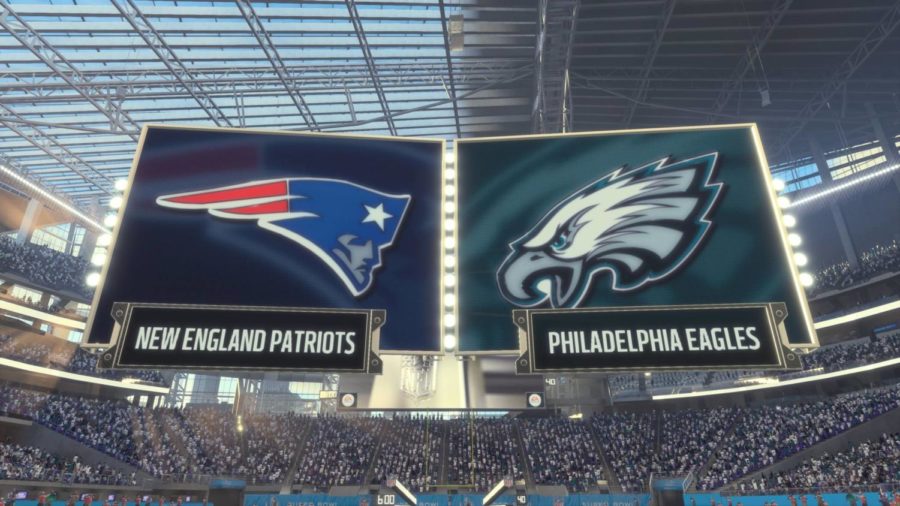 A bowl consisting of an Eagle and a Patriot? Sounds tasty.

The Super Bowl. The biggest football game of the year. The Philadelphia Eagles face the New England Patriots in a Super Bowl rematch. The defining factors for winners and losers comes down to what wins championships. Defense.

The Eagles whole DNA has changed from a year ago. Last year their players sat at home and saw the NFL playoffs unfold with the Patriots coming out on top once again. Now they are going to compete against the team they watched come back from a 28-3 deficit.

The Eagles were a 7-9 team last year but this year they had the best record in the NFL. Most say the unexpected turnaround was the fantastic sophomore season of Carson Wentz, so fantastic that he was the leading player for MVP until he tore his ACL in week 14 against the L.A. Rams. Many thought that the Eagles would plummet down the rankings and have a failed post season. The Eagles loved seeing the doubters because it fueled them to go 110 percent with every play. Lane Johnson and Chris Long of the Eagles loved it so much when they beat the Atlanta Falcons in the divisional round, they put on dog masks because they were the first seed in the NFC yet were bet to lose the game. The fans have picked up on the underdog hype and many were seen at the Vikings game with dog masks and there will probably be even more for the Super Bowl.

The Philly Eagles defense is one of the best in the league at capitalizing on opponents mistakes. One mistake against the Eagles can cost the momentum and eventually the whole game. They also have the perfect remedy to beat Tom Brady; a plain four man rush the whole game to keep linebackers and defensive backs in coverage. This is the historic way to beat Tom Brady and the Patriots. With one of the deepest defensive depth charts in the league, the Eagles have Brandon Graham, Vinny Curry, Derek Barnett, and Chris Long coming off the edge and one of the best defensive tackles in the league with Fletcher Cox. With him is Tim Jernigan and Beau Allen. Keep in mind that only four of those players will be on the field at a time, which means that all of those players will have lots of time to rest. This allows the Eagles very athletic linebackers and secondary to “fly” around the defense. On the offensive side of the Eagles game is a backup quarterback named Nick Foles playing the best football of his career. Remember that this backup went to the Pro Bowl in 2013 and got his team an entrance into the playoffs with a 10-6 record. He can get the job done for the Eagles especially with his talented receiving core and dynamic running game by his side.

On the other side of things is the big bad Patriots. The Patriots have a very odd defensive setup. New England had the second worst yards per play and most yards per drive that ended at their own 40 yard line. That is the thing though, they do not let people get past the edge of field goal range. The Pats defense is the epitome of a “bend but don’t break” defensive scheme. On the offensive side of the ball we all know that arguably the greatest quarterback of all time is manning the ship. There is no way to stop Tom Brady but there is a way to slow him down and try to shut down the recievers. With Julian Edelman hurt, that leaves Danny Amendola, Brandon Cooks, and Rob Gronkowski. Rob Gronkowski will have to be manned up and have safety help over top to stop him. The Jacksonville Jaguars did a great job stopping Gronk before his injury. With the Patriots offense the person who is forgot about in scheming is usually the one who has a field day. The Jags did a great job covering Gronk and Cooks but that let Danny Amendola tear them up because they were focused on the other weapons.

The Super Bowl will be a very close game but the Philadelphia Eagles will beat the New England Patriots 27-20. The Eagles have all the players to match up with the Pats receivers and have a very talented offense themselves.