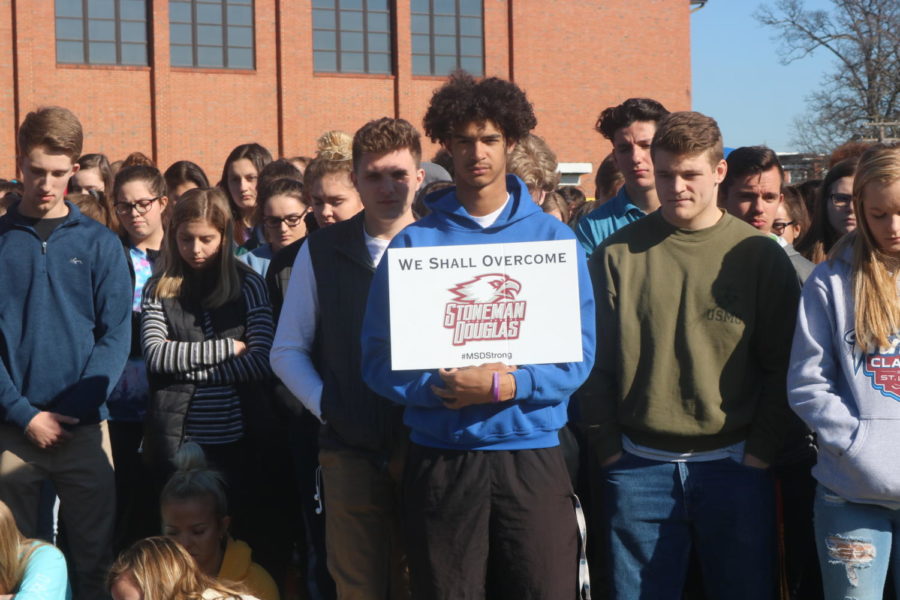 Mark Zuckerberg once said ¨There is a huge need and a huge opportunity to get everyone in the world connected, to give everyone a voice and to help transform society for the future.¨

The day was bright and chilly, but that did not keep students of Mehlville High School from taking part in this powerful memorial that was held nationwide. Individuals walked out of the building one by one to form a huge huddled group in the middle of the softball field. They stood for one purpose as a student body. Even though there was most likely a few who walked out without knowing the real reason for doing so, the movement was still powerful and it was felt.

A lot of students across the nation that participated in this movement faced fears of punishments from the schools and school districts. Our staff, however, seemed to be in complete support of the students.

“I was in support of the students who wanted to do something that made them feel like they are supporting and showing that they cared about (the 17 victims killed in the Florida school shooting),” said Mrs. Perrica, a math teacher.

When assistant principal Mr. Ruzicka was asked about the walk out, he gave a similar answer.

“I am for kids having their voice and their opinions heard,” said Ruzicka, “I was hoping for it to be a peaceful demonstration that (teachers and staff) didn’t have to get involved in and that’s exactly what we saw.”

There was still some concern in how the students would treat this opportunity to stand for a cause greater than themselves.

The students were able to prove themselves as a school of character by accomplishing a true showing of a peaceful movement.

Other adult supervisors thought the same of the students who chose to walk out.

¨I was really proud of our students,¨ said Perrica. ¨ I thought that they showed tremendous respect for the victims of the shooting and I was very proud. It showed that they really cared about people and they didn’t use this as a time to just walk out of school and they were really out there for a reason.¨

Even though this walk out was staged as a memorial for the victims of Stoneman Douglas High School in Florida, there is still one issue that is addressed in this movement. That is the acts on gun control and school safety.

Our faculty has taken school safety serious after the events and are applying everything they know and using everything in their power to ensure our safety at Mehlville.

¨We are doing a lot of things behind the scenes and in front of you guys to proceed caution.¨ said Ruzicka. ¨We did class meetings, we´ve had training with our staff two different times. We are doing a lot of relooking at our safety plans and readdressing those things and really trying to make them as best we can for any horrible situation. We want to be prepared but we don’t want to scare people at the same time.¨

Our S.R.O., Officer Jacobsmeyer, wants students to know that Mehlville is a generally safe place and that him and the rest of the staff are doing the proper procedures and training to incorporate school safety.

¨You never know if an event like this will ever happen,¨ said Jacobsmeyer, ¨but the idea is to put forward the effort to learn from what happened at the other schools and bring them to our school. I think Mehlville is doing a great job of it.¨