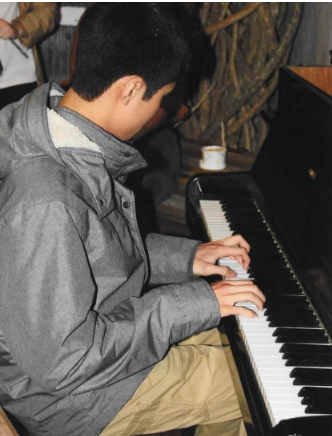 William Ho, or Will, is a junior at Mehlville. With a plethora of skills up his sleeve, he told me about his middle school days at Margaret Buerkle Middle School. Back then, he was a fabulous rollerblader.

“Like I said, there was no stopping, I just would find somewhere to crash.”

Surprisingly he never got hurt. “The only place I got hurt was in an arena. Like literally, out of all of the places, I got hurt inside of there. I fell backwards and landed on my wrist and I broke it. I thought I sprained but it was actually fractured. I was in 7th grade. Me and my cousin, she’s the same age as me — we would go rollerblading around her neighborhood. We would just explore new roads and everything.”

However, Will doesn’t necessarily rollerblade anymore. Now-a-days his time is spent either at school or at home, both revolving around one word: music.

“I’m the guy in the back of the field conducting when the band’s turned around.” Will is a drum major and has been involved in marching band since seventh grade. However, he has been involved in band since sixth grade. Although he is a drum major and has played the saxophone since he started the program at Mehlville, he is more focused on two other instruments outside of school and has big plans for them.

“I’m making an arrangement and composition on the piano and guitar. I want to see how far I can get musically. I was just messing around with the guitar because I was bored and came up with a cool melody.”

His typical day usually consists of getting home either at two or five depending on band rehearsal. Usually he tries to finish his homework at school, but if he can’t he rushes home and does his homework fast. The rest of the day he practices his guitar and piano until he has to go to sleep.“Once you practice long enough hours you build up patience. I think that’s a good life skill to have.”
As for the composition, he has the melody in mind but he says he still has a lot to learn. For now it’s going to be a lot of trial and error.

And as for what lies ahead? “I had my eyes set on WashU for the longest time. Suddenly I switched majors and I don’t know anymore.”

Will still has time to figure out what college he plans on attending. Until then, he still has his mom’s unwavering support.

“It’s all thanks to my mom too. If she didn’t push me to practice and take those lessons then I probably wouldn’t have become a musician.”