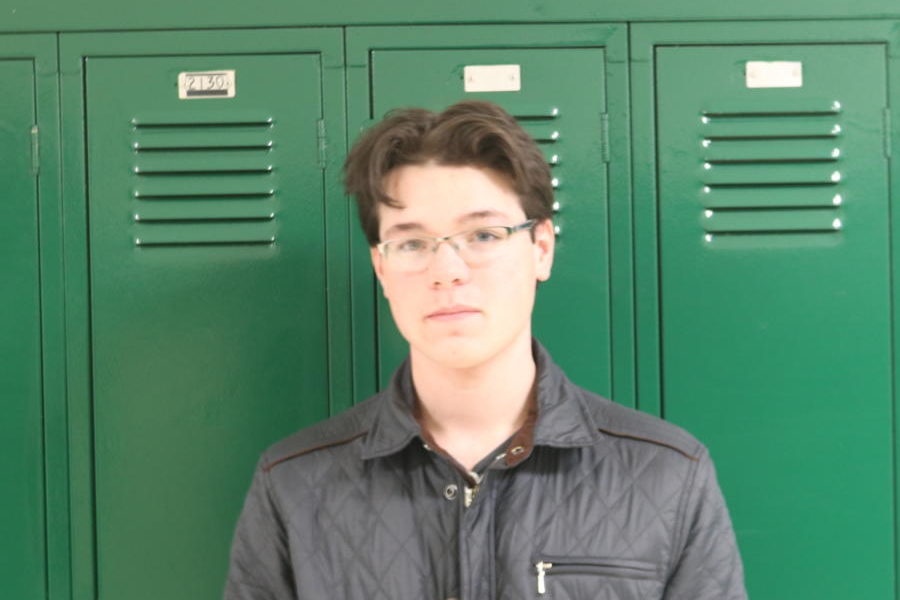 Dakota Hinrichs, a sophomore who spends his time after school in a cave

When thinking of a cave, one might imagine a dark vast hole that stretches deep inside the side of a mountain. A hole that has a load of mysteries waiting to be discovered with creatures such as bats, snakes, and spiders. A true example of nature at its deepest parts. Though scientists have discovered a lot about them, caves have a lot more to share with the human race.

In the same way, Dakota Hinrichs has a lot to share about himself. One mystery he was willing to share was that he works in a cave.

Hinrichs works at Bussen Undergrounds which is located off of Koch Road. Bussen Undergrounds is a limestone quarry that the Bussen family have claimed and started mining within. Today, inside the caves are a series of quarries, terminals, underground warehouses, and office space. Things you would never expect to find in a cave.  The room in which Hinrichs works is 30℉ and he spends his time packaging food for his company, Metabolic Meals.

“I’ve been working there for about three or four months now,” said Hinrichs. “I go in at  3:30pm and I get off at various times at night. Sometimes it can be at 8pm, sometimes it’s at 11pm, It all depends on when we finish.”

“We have performance meals which is basically protein. Bodybuilders who are trying get muscle usually get this meal. Then there is fit meals. That is for people trying to lose weight,” said Hinrichs.

Hinrichs is often seen as a city boy. This could be due to the fact that he is living in a large city such as St. Louis. Hinrichs, however, doesn’t define himself as a city boy. His heart belongs in the country.

“I don’t like the city, I like down south better,” said Hinrichs, “I’m not from the country, but I have family down there and I go there every summer and as many weekends as I can.”

As a lover of the outdoors, Hinrichs takes joy in going fishing and hunting. He uses it to relieve stress and relax in the pureness of nature, when he’s in Southern Missouri

Fishing and hunting brings back many childhood memories. One memory in particular is going down to his family’s farm with his uncle.

¨My uncle passing away was probably one of the hardest things I had to go through in my life,” said Hinrichs, ¨When he was still here, I went to [the country] almost every single week, but now I don’t go as often as I used to. Now, I only go there maybe one weekend out of the month.”

Hinrichs and his uncle spent a lot of time together in the country.

“Fishing helps me cope with this hardship because he and I used to go fishing a lot,” said Hinrichs. “We would also ride four wheelers on trails and things like that. Sometimes we would just drive around all day so driving reminds me of him as well.”

Hinrichs, only being a sophomore, has not decided what he wants to do after high school yet. However, he has interest in either joining the military or going to college and studying solar and wind turbine engineering. He is also looking into following his grandpa and working on the railroad in the future.